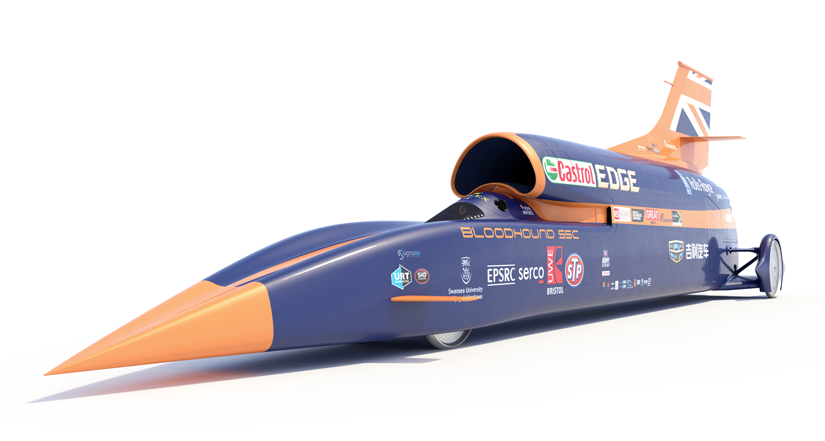 The BLOODHOUND Project is a global Engineering Adventure, using a 1000mph world land speed record attempt to inspire the next generation to enjoy, explore and get involved in science, technology, engineering and mathematics.

Collaboration, openness, sharing, and working in support of education to support the future are the core of The Bloodhound Project’s ethos and values, and so to inspire a new generation of engineers who will build the high-technology world of the future.

The ‘BLOODHOUND Project’ is the third and latest chapter in ‘The Thrust Team’s’ story. A story which has dominated the pursuit of landspeed records and engineering firsts since founder, Richard Noble, achieved the world record in 1983 with 633.468 mph in his car ‘Thrust2’.

The 2nd chapter in 1997, 14 years later, saw the same British ‘Thrust Team’ achieve a massive engineering feat with British Royal Air Force pilot Andy Green driving the jet-powered Thrust SSC, as they powered through and beyond the sound barrier to 763.035 m.p.h. Breaking the team’s own world record!

In a bid to beat that record, Andy Green and The BLOODHOUND Project Team are aiming to reach 1000 mph at Hakskeen Pan, Northern Cape, South Africa, in Autumn 2019.

TRILOGIQ is delighted to become involved by providing The BLOODHOUND Project with bespoke modular storage, transportation and support trolleys for critical component parts of The BLOODHOUND SSC car.

BLOODHOUND SSC is 13.4 metres long, weighing 7.5 tonnes; her two engines produce more than 135,000 horsepower. There are over 110 man YEARS invested in the design and construction of BLOODHOUND SSC. Every single component of the car is fundamental and critical. TRILOGIQ have designed and produced systems which will ensure certain critical parts of BLOODHOUND SSC are stored, transported and maintained as safely and as securely as possible.

After many years of ground breaking design, testing and construction, finally the time has arrived for BLOODHOUND SSC to be demonstrated to the World. The critical testing and development process required to further the team’s process towards the world record attempt, will be carried out at Cornwall’s Airport in Newquay UK, in a three day event from the 26th to the 30th October. History will be made when Andy Green, current World Land Speed Record holder, will test BLOODHOUND SSC and all of her critical systems and components, powered for the first time by her own engines. This testing weekend will ensure that all of the systems on the car work as they are designed to. Modest speeds will be set during this test phase.

TRILOGIQ is also proud to be supplying The BLOODHOUND Project with display stands for the photography exhibition in the VIP entrance and the pedestrian safety barrier for BLOODHOUND SSC’s first international public runs event.

Bloodhound SSC is a British supersonic land vehicle currently in development. Its goal is to match or exceed 1,000 miles per hour (1,609 km/h) achieving a new world land speed record. The pencil-shaped car, powered by a jet engine and a rocket engine is designed to reach 1,050 miles per hour (1,690 km/h).

The Car will be powered by both a jet engine and a rocket, which together will produce more than 135,000 horsepower: that’s more than six times the power of all the Formula 1 cars on a starting grid put together. Over 110 man years of effort has been invested in the design, build and manufacture of BLOODHOUND SSC.